From ZaberWiki
Jump to navigation Jump to search

To minimize the number of power supplies needed, the on-board +5V and GND connections can be used as non-isolated power supplies for I/O circuitry as long as the current draw remains below 150 mA.

The digital inputs on the {{{Device}}} are fully opto-isolated and bi-directional, giving added flexibility when interfacing to external equipment. The two examples below demonstrate how the common line can be connected to a power rail or to ground, depending on the application. 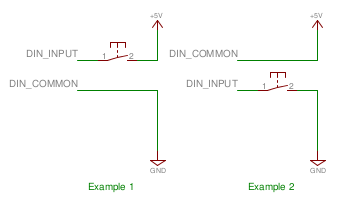 Each digital input contains an internal current limiting resistor of 442 ohms. While this value is suitable for driving the inputs with 5V (as shown in the circuit above), higher voltages will require the addition of a series resistor. A list of recommended values for the external resistor and example circuit are shown below. 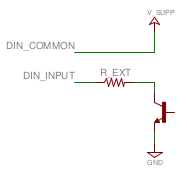 The circuit above also shows how to interface with an open collector output from another device. Reading the inputs is accomplished by sending the unit an io get command, as shown below.

All digital outputs on the {{{Device}}} are fully optoisolated and capable of sinking 20mA each at up to 60V. The first example circuit below shows how to drive an LED from one of the digital outputs. In order to switch loads with a higher current draw, for example a relay, an external switching transistor is required, as shown in example 2. 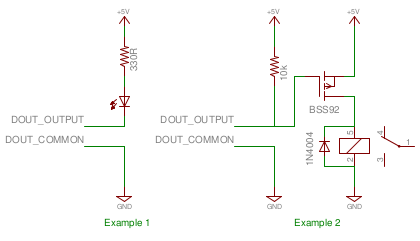 The digital outputs are set through the io set command, as shown below.

The first command sets the first digital output, which would cause the LED in example 1 above to glow. The second command clears the output, turning off the LED.

Additional circuitry is required to get TTL signal levels from the {{{Device}}}, as shown below. 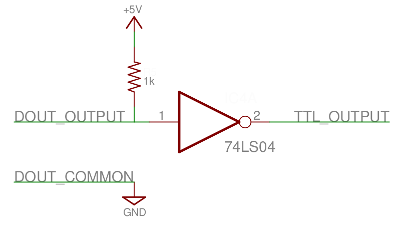 The 74LS04 contains 6 inverters so it is possible to convert all of the digital outputs with one IC. In order to maintain isolation, it is recommended that the 5V and GND supply connections come from the device requiring the TTL signalling. It is, however, possible to use the 5V and GND connections from the Analog Output connector on the {{{Device}}} to power the external device, as long as the current limits are adhered to. 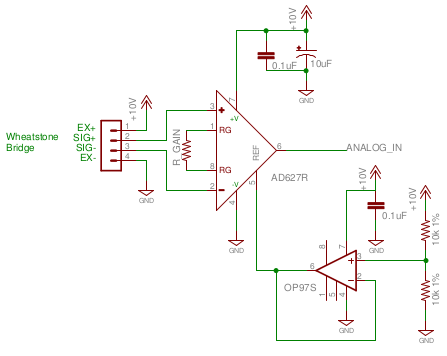 The reference circuit below demonstrates interfacing a thermocouple to the {{{Device}}}. Depending on the application, an offset voltage may need to be provided. 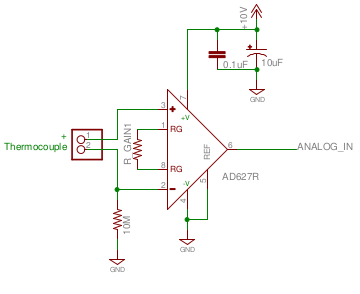